Sale and Purchase of Rent Receivables to Investors

The basic idea is a repo transaction in relation to rental income received by the owner. The idea was created due to the current turmoil in the financial and capital markets which affected the lending capabilities. Neither any asset backed securitisation which was the name of the game in the last five years nor any form of loan which is later on syndicated can be disbursed these days when it comes to larger loans or greater exposure to individual assets or a single borrower.

At the outset, the owner sells its rental receivables to the investor. The owner is organised and established as a single purpose entity in compliance with the Standard & Poor’s requirements published in September 2004 in relation to the CMBS loans in Europe. The investor pays to the owner a purchase price for the loans which reflects the multiple by which the net annual rent is taken in order to reach the value of the respective property. The expectation by the owner is to receive a purchase price of between 65 to 80 per cent. of the property value. At the outset the investor concludes simultaneously with the owner an agreement whereby the owner purchases back the rent receivables whereby the purchase takes place immediately but the transfer of the receivables will take place after a term of 5, 7 or ten years. As the repurchase price becomes only due and payable after the earlier of (a) the repurchase price due date and (b) the date which is triggered to be a due date prior to the final due date by virtue of other trigger events (e.g. insolvency, covenant breach, non-payment, etc.), the owner will pay interest at the pre-agreed rate on the repurchase amount. The payment can be achieved in two ways: (a) for Islamic financing purposes the repurchase price can be calculated as being the purchase price plus the accumulated interest over the agreed term or (b) the interest being defined as the repurchase rate can be computed on quarterly rate payment dates.

The rent receivables will be collected on waterfall accounts. From the collected amounts one will pay first any fees and amounts due under the repurchase agreement, thereafter interest (in the ordinary course of business) or advances on the repurchase price as increased (for Islamic financing purposes), and following that either actual repayment amounts and finally amounts needed to pay for the capital expenditure, the maintenance and other costs to upkeep the relevant properties.

The right to receive the repurchase price is secured similarly to a CMBS transaction: mortgages, assignments of rents, disposal and insurance proceeds and account pledges. The collateral is held on behalf of the investors by a security trustee which is set-up by our own Swiss Holding Company.

Current yields to investors will be available on a fixed rate basis between 5.7 and 6.2 per cent. p.a. Transaction fees will be borne by the owner as well as an arrangement fee of 100 bps. The agency fee is about 12 bps p.a. Transaction costs per transaction can be assumed for a fully fledged due diligence to be in the region of € 500,000 for a transaction up to € 50 million, € 750,000 for up to € 100 million and € 950,000 up until an amount of a single transaction of € 150 million. The current pipeline of deals for refinancing is approximately € 1.5 bn. in total.

The portfolio can be structured in accordance with the requirements of the individual group of investors: it can be either single assets or a portfolio of different assets (either by location, type or regional diversification). Furthermore, needs of the owners for replacement of individual assets in case of a development of existing properties can be covered by certain eligibility criteria for the sold receivables, the release of security and further safety features.

Accounting treatment follows the repo transactions: the receivables remain for accounting purposes in the balance sheet of the owner. He still receives income from the renting of properties and he still achieves the tax benefits from depreciation. The investor has interest income. The investor’s participation can be structured so to only cover the senior loan part up to an equity participation. While the model in its basic structure foresees only a participation in the most senior part of the receivables which generate a senior loan yield, the participation could be stretched also to the remaining income in the general account of the owner. This would, however, increase the relevant loan to value threshold.

RIST can be combined with an investment in the underlying loan if the rationale behind the RIST transaction is to refinance the existing indebtedness of the owner. Under current market conditions, there are currently acquisition possibilities where the underlying loans are available in the market for a discount of up to 10 per cent. In order to create a separate profit centre one could set-up one vehicle which acquires the relevant loans for the refinancing of which is interest among institutional RIST investors. Upon acquisition of such loans, the RIST transaction would need to be set up. When the relevant loan is transferred, the new lender allows the owner to refinance the existing loan with no prepayment penalties in order to induce him into the refinancing as such. The owner will then have the opportunity to refinance his loan at an earlier stage at no additional costs (assuming that interest rates are still preferable to him). When the two transactions unfold, the investor in the loan has made a profit in a corresponding amount of the loan discount. As this profit is related to the RIST transaction, the investor in the loan portfolio could share a part of his profit with the RIST investor which would increase the RIST investor’s return as well. Both parts of this investment opportunity can be structured in a specific way so to allow it also for Islamic investors under current interest prohibition rules.

Actual figures and investment highlights will be shared upon exchange of a confidentiality agreement.

The actual payment and income streams of a RIST transaction can be seen from the graph on the next page. 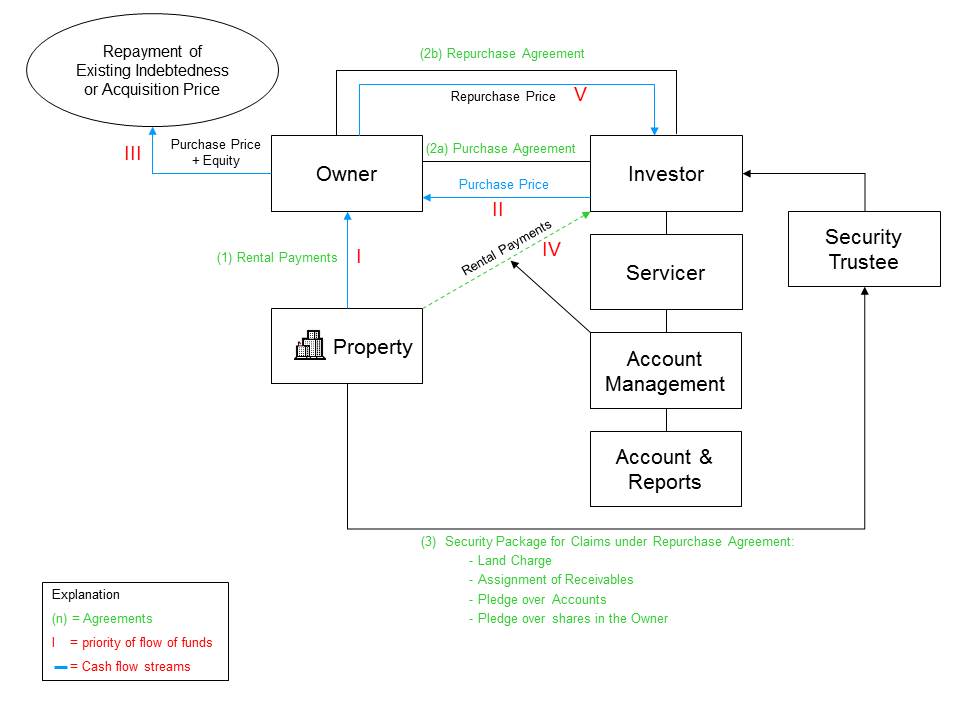